skip to main | skip to sidebar

Hugh Cook: The Wordsmith and the Warrior

This article was produced as part of New Zealand Speculative Fiction Week. For more information, go to Pterodaustro Dreams.

Hugh Cook might not be a name instantly recognised by readers of the fantasy genre, but to his legion of dedicated fans across the world, mention of the man and his work inspires a sense of reverence.

Cook remains one of New Zealand’s unsung heroes of fantasy literature, despite his achievements outshining those of many of our more well-known authors. Between 1986 and 1992 Cook released his Chronicles of an Age of Darkness series, a ten-book cycle of stand-alone fantasy novels. Set on a world ruled by bloodthirsty emperors, threatened by swarms of monsters, and blessedly devoid of goblins and elves, the Chronicles capture a history of Cook’s lands and their people in a multitude of voices, spanning continents, and all occurring roughly within the same timeframe of a decade or two. Characters recur across the books, making cameo appearances from one story to the next, weaving a complex web of events that draws the reader through the series, however unrelated each volume may seem to be at a glance.

Cook was among a group of authors who eschewed the traditions of Tolkienesque high fantasy, choosing instead to write about the dark, unsavoury aspects of human nature in the grim harshness of a world bent on crushing the meek. In Cook’s world, orcs are hunted for their blubber and sea dragons are vain creatures who pretend to recite poetry in their sleep before sinking into snoring heaps. Empires are driven to war by syphilitic emperors, who are in turn murdered by warring sons. Heroism is a constant theme, usually as a partner to vanity, folly and ultimately death, and can be summed up in the immortal line, “vaunting their boasts with the blood of their lungs on their lips.”

Suffice to say that Cook rebelled, writing unorthodox fantasy in an unorthodox world. He dismantled old tropes and bent the genre like light through a smoked lens. He replaced the tired theme of good versus evil with one which instead pitted brutality against barbarism, and rarely delivered a clear victor. Cook not only rejected the clichés of the fantasy genre; he subverted them with an almost malicious glee.

To judge Cook’s success by book sales alone would be misleading, but the numbers are certainly impressive at first glance. Altogether, the Chronicles sold around 450,000 copies, and that in itself is reason for celebration for any New Zealand author. The Wizards and the Warriors, together with its US incarnation, Wizard War, sold over 160,000 copies, a phenomenal sales record for any fantasy author. 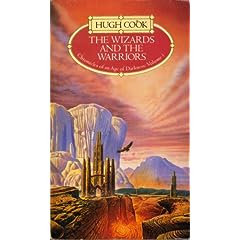 Unfortunately, as the Chronicles became less conventional and more obtuse, sales began to decline. This was compounded by the decision made by bookselling chain W.H. Smith to drop Cook’s books from their shelves when sales slowed, which inevitably led to an even steeper fall. Despite a rebounding of style and content in the last three books of the series towards more action-based storytelling, Cook had largely lost the means to supply to his mainstream audience, with sales for these three books falling to between 7,000 and 10,000 copies each. I bought all my copies of Hugh’s books in my local Whitcoulls here in New Zealand, where his books enjoyed pride of place on their shelves with every release. But if the books were not on the shelves overseas, then Cook’s fans had little chance of finding them.

Cook’s prose drew heavily on the landscape, places and mythology of New Zealand, from the legendary Taniwha of Quilth, to the Ngati Moana, to a prison called Maremoremo (after Paremoremo in Auckland). Our native flora and fauna often made cameo appearances in wild locales, including weka, kauri and rimu, to name but a few – all of this well over a decade before Peter Jackson delivered our country up to the world as Middle Earth. Cook refused to suffer from cultural cringe; he embraced our country’s uniqueness and used it to flavour his own inimitable world and style.

China Mieville, author of Perdido Street Station, sums Cook up nicely; “Hugh Cook was one of the most inventive, witty, unflinching, serious, humane and criminally underrated writers in imaginative fiction. Or anywhere.” It remains a shame that so few New Zealanders know that Cook was a Kiwi writer, but there is a good reason for this: Hugh Cook may have lived in New Zealand and written in New Zealand, but I suspect he saw the same tired faults with our nationalistic model of publishing and author recognition as he saw in the failure of the fantasy genre to redefine itself. Accordingly, after publishing Plague Summer here in 1980, he bypassed the New Zealand publishing model and went instead to the London market, where he secured publishing deals almost simultaneously for both his science fiction novel The Shift (Jonathan Cape, 1986) and the first volume in the Chronicles series, The Wizards and the Warriors (Corgi,1986). 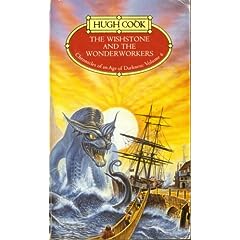 What separated Cook from so many of his contemporaries was his ability to alter his prose style from book to book, while he never lost his unique authorial voice. Two of the Chronicles, The Wishstone and the Wonderworkers and The Wazir and the Witch, take the form of actual recorded histories, thick with the idiosyncrasies of both the imaginary scribe and subsequent editors, and are thus peppered with redactions and long, apparently unrelated diatribes. These books are full of acerbic dark wit and bleak philosophies, and represent, in some ways, Cook’s ultimate success at writing fantasy that transcended the sword and sorcery models of the genre. For all their apparently random digressions beyond the story, these two books might be seen as the pinnacle of Cook’s genius, for there is a depth to these tales that no amount of Feistian swashbuckling or Eddingsesque adventuring could rival. Some readers even suggested that ‘Hugh Cook’ was not one writer but many, a collaboration of individuals writing in isolation with a single grand design in mind. But Hugh Cook was just one man, a prolific author and poet, whose storytelling skills ascended beyond the formulaic norm into something infinitely more enduring.

Ironically it was these two books, with their challenging diversions into philosophy and metaphysics, that seemed to undermine Cook’s mainstream success. Book sales for these two volumes showed a steep slide from his earlier highs, and may have contributed to the W.H. Smith decision and its consequences for Cook’s publishing career. Cook did with fantasy what hard science fiction does to that broader genre, by delving into in-depth ruminations of the unknown and fantastical in the body of his storytelling. Cook teased apart the nature of magic and the supernatural as demi-scientific concepts, as well as exploring the brutal underside of human nature as represented by its practice in politics and warfare – stark metaphors for the real world, despite being dished up in the barbaric soup of a fantasy setting. Apparently, booksellers suspected that works of this complexity and wisdom would not be appreciated by fans of the tales of blood-soaked armies, pirates, and torturers that had preceded them. This was truly a pity.

Cook’s epic plan for a sixty book series was accordingly cut short, and after publishing the brilliant conclusion to the Chronicles, The Witchlord and the Weaponmaster, he went on to champion print-on-demand technology and electronic formats, constantly moving into newer and stranger worlds with his writing. He was among the first authors to publish works through Lulu.com with the Oceans of Light trilogy and later, Cancer Patient. Even so, the Chronicles remain Cook’s legacy, and copies of these volumes continue to fetch outlandish prices in second-hand book markets around the world (my own collection must be worth a small fortune, according to Amazon – but it is most certainly not for sale).

Cook was diagnosed with Non-Hodgkins Lymphoma in 2005. He endured months of chemotherapy and radiation treatment in Auckland, which briefly sent the cancer into remission. During this ordeal he wrote Cancer Patient, a collection of musings, poetry and recollections which document his struggle with the disease and what he learned about life and the human condition in the process. 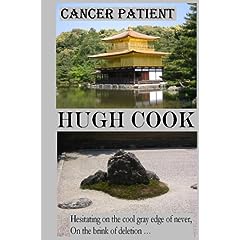 This book is available for free as an online e-book or as a download from zenvirus.com, one of Hugh’s many websites. Unfortunately in 2007 the cancer returned, and Cook passed away on November 8th, 2008, after bravely battling the disease for so many years. It is a testament to the scope of his fanbase that the obituary I wrote for him, which was published in the New Zealand Herald and which I posted to my blog in December last year, remains one of my most frequently visited pages.

Ultimately, Cook was both Wordsmith and Warrior. Poems, stories and characters were his tools and his weapons. He wrote with a passion, producing fiction at a prolific rate, and the English language would be greatly enriched if all the words and terms he had coined in his oeuvre were to be introduced into common parlance. He fought to find new ways forward in the publishing world, exploiting technologies that are only now starting to establish their true place in the electronic market. He maintained his integrity as an author to the very end, determined to always share the stories he had to tell, and not those that others wanted him to tell. At the end, he fought an unseen enemy – fought it and beat it, if only for a short time. Even in this, he had a story to tell, one that may not have been able to completely defeat that insidious foe, but which may yet bring comfort to others who face those same demons at some stage.

For those of you interested in reading Hugh Cook’s work, samples and full-length copies of some of his books can be found at zenvirus.com. Also, keep an eye out for a reissue of The Walrus and the Warwolf, due for release in 2010 by Piazo Publishing, with an introduction penned by China Mieville.

Walrus is recognised by Hugh’s fans as his finest hour, and well worth a read by any lover of epic fantasy. To quote Mieville again, “To honour the memory of this wonderful and generous-spirited writer and man, those - too bloody few - of us who know his work should do all we can to bring it to the world's attention.”

Man’s first death is the random potential
Of aeons before conception,
And the surf, merging life with form,
The surf is creation and rebirth.

I would like to thank Colin Smythe, China Mieville, and the Cook family for their kind assistance in preparing this article.